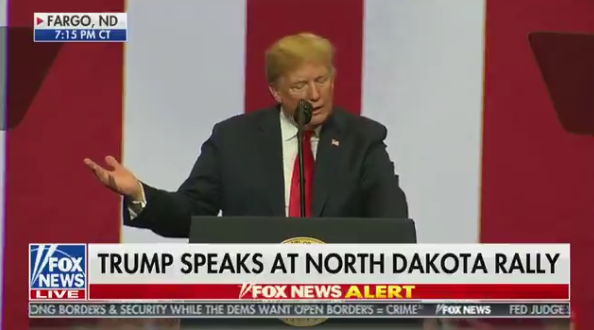 If you have ever suffered a bout of insomnia, chances are you’ve seen some bizarre infomercials. You may therefore be familiar with MyPillow and have found yourself wondering if the product is the answer to your sleep issues. The company, MyPillow, has at least one huge fan.

At a rally in Fargo, N.D., on Wednesday, President Trump noted MyPillow CEO Mike Lindell as a longtime supporter and marveled at how many ads the company airs. Granted, after many companies pulled their ads on Fox, it’s not surprising that a business like MyPillow would grab their slots for “peanuts,” as Trump estimates.

The president said, “I want you to be my ad buyer because I guarantee you he makes great deals. “He does make a great product, great pillows,” Trump said. “I actually use them, believe it or not.”

In November Lindell agreed to pay a penalty of $1 million after a group of California County Attorneys took legal action against the company, alleging deceptive advertising. A consumer watchdog organization said MyPillow’s website made unsubstantiated claims its products can cure snoring, migraines, fibromyalgia, and other health maladies.

Lindell agreed to the settlement, but insisted he made no medical claims whatsoever, saying MyPillow simply posted customer comments on the website. He told NBC News he is settling the charges simply because it makes financial sense, and is not an admission of guilt.

Trump does a lengthy promo for My Pillow. #TheGriftNeverStops pic.twitter.com/osxaLGBgA5

Trump talking about MyPillow commercials. You know why? Because Hannity and Ingraham have lost so so so many advertisers that MyPillow ads practically run on a loop during those programs.

The “As used by President Trump” My Pillow TV ad is going to be awesome! #TrumpFargo pic.twitter.com/W8YSck68Bl