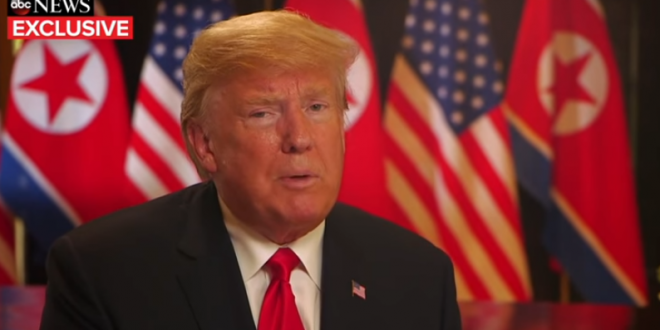 Trump On Kim: We Have A Very Special Bond [VIDEO]

“I do trust him, yeah,” Trump said. “Maybe in a year you’ll be interviewing and I’ll say I made a mistake. It’s possible. We’re dealing at a high level, a lot of things can change, a lot of things are possible.”

“I think our whole relationship with North Korea and the Korean Peninsula – it’s going to be a very different relationship than it has in the past,” Trump said. He went on to say that he and Kim have “developed a very special bond” and that they spent “a lot of time together today, very intensive time.”

‘Get a good picture so we look nice and handsome’ – Donald Trump asked photographers to make him look ‘thin and perfect’ at his working lunch with Kim Jong Un #TrumpKim #USNorthKorea pic.twitter.com/tWAYRz8mus

Trump on Kim: “His country does love him. His people, you see the fervor. They have a great fervor.” https://t.co/vs5sDIB4UK

what does Kim get? “He’s going to be happy. His country does love him. His people, you see the fervor,” Trump says. https://t.co/hyVSDmVE6e

Previous Trump To Sean Hannity: I Felt Foolish Calling Kim “Little Rocket Man” But I Had To Go Out Aggressive [VIDEO]
Next Lindsey Graham: I “Violently Disagree” With Trump’s Pledge To Withdraw US Forces From South Korea