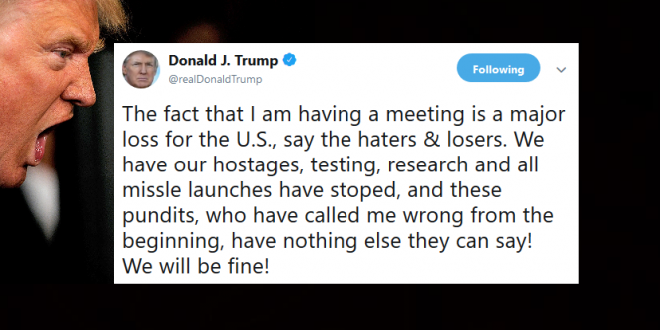 When President Trump and Kim Jong Un come face to face in Singapore, it will be for a one-on-one session (plus translators) as they attempt to hash out the future of North Korea’s nuclear weapons programs. Are you wondering about this decision? Some analysts are, too.

“Trump is simply not experienced enough or temperamentally inclined to handle the complexity of nuclear negotiations or issues as complex as those associated with the long history of the Koreas,” one scholar told USA TODAY’s David Jackson. Trump, predictably, disagrees.

The fact that I am having a meeting is a major loss for the U.S., say the haters & losers. We have our hostages, testing, research and all missle launches have stoped, and these pundits, who have called me wrong from the beginning, have nothing else they can say! We will be fine!

Every time I speak of the haters and losers I do so with great love and affection. They cannot help the fact that they were born fucked up!

Sorry losers and haters, but my I.Q. is one of the highest -and you all know it! Please don’t feel so stupid or insecure,it’s not your fault