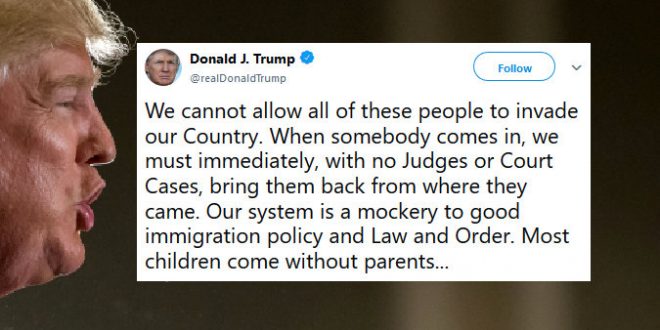 President Trump asserted on Sunday that immigrants who crossed into the United States illegally should be sent back immediately without due process or an appearance before a judge, an escalation of his attacks on the judicial system.

It was another twist in an already head-spinning series of developments on immigration after the president reversed a policy last week that had resulted in the separation of more than 2,300 children from their families.

The call to abandon due process on Sunday in some ways echoed part of his executive order, which seeks to detain immigrant families indefinitely, a stance that courts have said violates the rights of the children. But on Sunday, Mr. Trump went further, saying no judges at all were needed to process immigration cases.

We cannot allow all of these people to invade our Country. When somebody comes in, we must immediately, with no Judges or Court Cases, bring them back from where they came. Our system is a mockery to good immigration policy and Law and Order. Most children come without parents…

….Our Immigration policy, laughed at all over the world, is very unfair to all of those people who have gone through the system legally and are waiting on line for years! Immigration must be based on merit – we need people who will help to Make America Great Again!

Trump just demanded the ability to deport anyone he wants, at any time, without the involvement of a judge or any due process whatsoever.

Donald Trump expects due process for himself and scumbags like Rob Porter and Steve Wynn, but not for innocent groups like most immigrants seeking asylum or the Central Park Five. This wannabe dictator covets impunity and the ability to punish those he dislikes without cause.

When someone says “it’s not right they get yelled at when theyre at restaurants” just remind them Trump wants to eliminate due process https://t.co/hsxE7annO8

Trump’s assertion of unreviewable power to serve as prosecutor, judge, and jury of every asylum-seeker’s claim of right to be here has no basis in our Constitution or laws. It is a power grab one would expect of a fascist dictator, beyond even George IIIhttps://t.co/cDReZBujD4

Trump consistently behaves and speaks as though he longs to be a despot, unconstrained by democratic checks, due process, rule of law, or the press. This is a demonstrable fact. Republicans in Congress are complicit in his attacks on democratic institutions and should be ashamed. https://t.co/M6GDCJiIdL