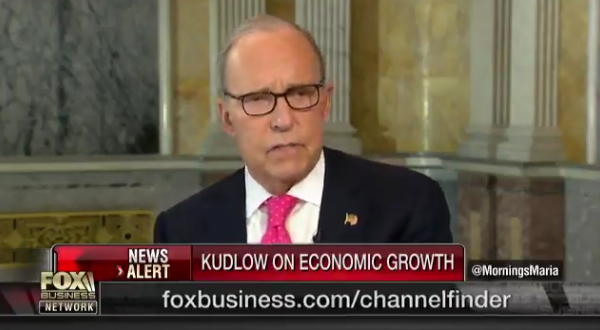 President Trump’s top economic advisor Larry Kudlow on Friday said the federal deficit is falling, even though the latest data shows it is expanding since the tax-cut law went into effect.

“As the economy gears up, more people working, better jobs and careers, those revenues come rolling in and the deficit, which was one of the other criticisms, is coming down,” Kudlow said in an interview with Fox Business. “And it’s coming down rapidly. Growth solves a lot of problems.”

In a report released earlier this month, the non-partisan Congressional Budget Office said the federal deficit had expended by $97 billion this year compared to last year.

This is your reminder that a guy who admits he once blew tens of thousands a month on his cocaine habit is now advising Trump on sound economic policies.

.@larry_kudlow: “The deficit… is coming down, and it’s coming down rapidly. Growth solves a lot of problems.” pic.twitter.com/H375h7rV0a