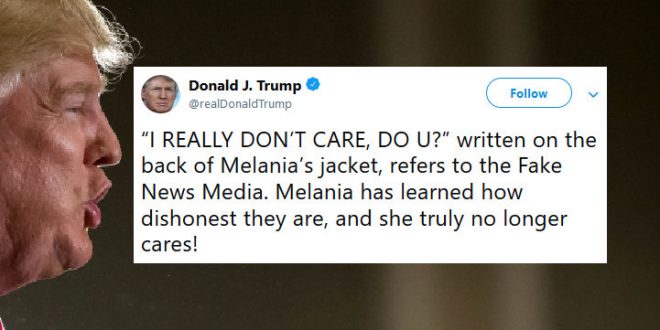 We all know that the jacket means, Glorious Leader.

President Trump said on Thursday that first lady Melania Trump’s eye-catching jacket with the words “I really don’t care. Do U?” that she before and after a trip to Texas to visit with migrant children, was a reference to the news media.

Democratic Rep. Dina Titus tweeted out her own version of the jacket by wearing a sign attached to her back, reading “I Care.” Despite the criticism, the first lady was seen arriving at Andrews Air Force Base and the White House wearing the same jacket.

“I REALLY DON’T CARE, DO U?” written on the back of Melania’s jacket, refers to the Fake News Media. Melania has learned how dishonest they are, and she truly no longer cares!

Today’s visit w the children in Texas impacted @flotus greatly. If media would spend their time & energy on her actions & efforts to help kids – rather than speculate & focus on her wardrobe – we could get so much accomplished on behalf of children. #SheCares #ItsJustAJacket

Hey #FLOTUS, try this on for size. #WhoWoreItBest #ICare pic.twitter.com/q3TwjSQGmR

Show the world that U CARE!

Melania Trump wore a jacket that said “I really don’t care. Do u?” on a trip to see children locked in detention camps.

Support immigrants by purchasing one of these:

Previous Christian Prophetess: When You Die, Jesus Throws You A Dance Party With Sweet Desserts In His Mansion
Next Fox News Contributor Charles Krauthammer Dies At 68