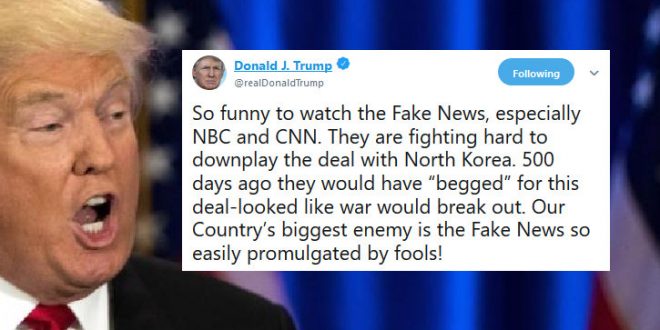 Trump: CNN And NBC Are Our Biggest Enemies

Glorious Leader is predictably furious about his reviews:

President Trump early Wednesday said that the United States’ “biggest enemy is the Fake News.” Trump’s tweet comes as news outlets, including NBC and CNN, report on the implications of his historic summit with Kim Jong Un in Singapore. The meeting was the first-ever between a North Korean leader and a sitting U.S. president. During the meeting, Trump and Kim signed an agreement on denuclearization. While the document was vague in detail, Trump praised it as “pretty comprehensive.”

So funny to watch the Fake News, especially NBC and CNN. They are fighting hard to downplay the deal with North Korea. 500 days ago they would have “begged” for this deal-looked like war would break out. Our Country’s biggest enemy is the Fake News so easily promulgated by fools!