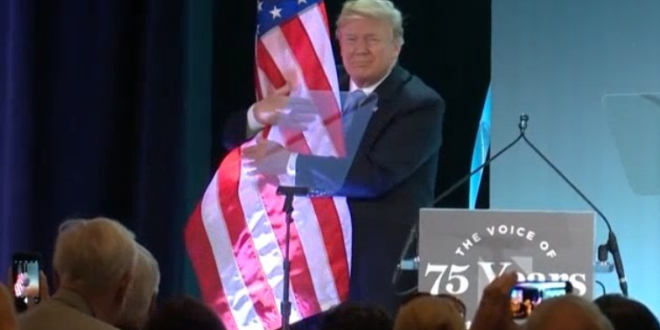 That thing where Glorious Leader says something so completely batshit insane that it gets a baffled mention on Footwear News:

After imposing additional tariffs on $200 billion worth of Chinese goods, President Donald Trump is drawing even more discussion today on social media for comments he made at the National Federation of Independent Business’ 75th anniversary celebration in Washington, D.C., to honor America’s small businesses.

After touting his rising approval numbers and discussing immigration laws, Trump suggested that Canadians are illegally moving U.S. goods, particularly footwear, across the border into Canada to avoid tariffs — which the president said were “so high, they have to smuggle them in.”

“They buy shoes, and they wear them. They scuff them up to make them sound old, look old,” Trump remarked, prompting reporters, journalists and other media members to respond on Twitter with their own stances.

Canadians, please let me know if you’ve ever crossed the border to buy shoes and made them all dirty before going home so Canadian customs wouldn’t notice that you’re a smuggler

.@realDonaldTrump just talked about a recent story “in a major newspaper” about Canadians having to smuggle shoes back into the US”

He didn’t name the “major newspaper” and I can’t find a single recent story on the subject in Google news.

He’s lying. He just made it up.

Trump is talking about Canadians crossing into the U.S. to smuggle sneakers back into Canada…? What the hell is he talking about?

Can we build a wall to protect our shoe industry from Canadian shoe scuffers?

I didn’t believe Trump was talking about how Canadians are smuggling shoes from the US back into Canada. But it’s real. Cus of course it is. pic.twitter.com/63GKrXPWPF