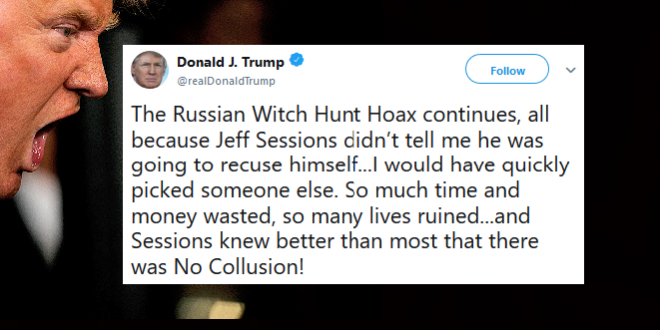 President Trump blamed Attorney General Jeff Sessions Tuesday for the ongoing “Russian Witch Hunt Hoax,” noting that he “would have quickly picked someone else” as the nation’s chief law officer if he knew of Sessions’ decision to “recuse himself.” The president suggested that Sessions, who was involved in the Trump campaign, “knew better than most that there was No Collusion.”

The president’s tweet is just the latest blow to Sessions. Last week, Trump said he wished he had appointed someone else to lead the Justice Department, following comments made by House Oversight Committee Chairman Trey Gowdy, R-S.C., who suggested there “are lots of really good lawyers in the country. He could have picked someone else.” Trump quoted Gowdy’s remarks, and concluded: “And I wish I did!”

The Russian Witch Hunt Hoax continues, all because Jeff Sessions didn’t tell me he was going to recuse himself…I would have quickly picked someone else. So much time and money wasted, so many lives ruined…and Sessions knew better than most that there was No Collusion!

Separating families at the Border is the fault of bad legislation passed by the Democrats. Border Security laws should be changed but the Dems can’t get their act together! Started the Wall.