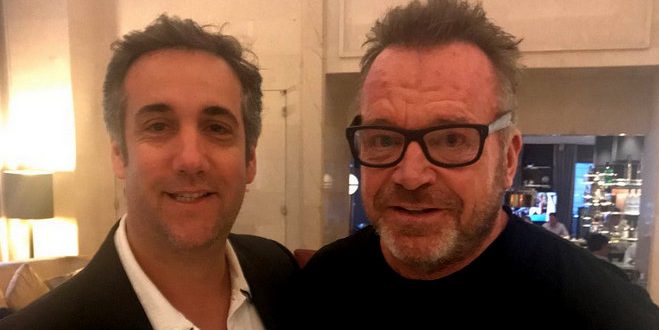 Tom Arnold: I’m Teaming Up With Michael Cohen To Take Down Trump, I Hope This Pic Haunts His Dreams

Comedian Tom Arnold said Friday that he and President Trump’s former, longtime personal lawyer are teaming up to “take down” the president. Arnold tweeted a photo with Michael Cohen on Thursday with the caption, “I Love New York,” which Cohen retweeted without comment.

Arnold then told NBC News that he met with Cohen as part of a show he is working on for Vice, in which he searches for incriminating videos of the president.

“This dude has all the tapes–this dude has everything,” Arnold told NBC News. “I say to Michael, ‘Guess what? We’re taking Trump down together,’ and he’s so tired he’s like, ‘OK,’ and his wife is like, ‘OK, f— Trump.’”

Arnold told NBC News early Friday that Cohen ― who is under investigation by federal prosecutors ― talked to him for the show, which is expected to air later this year.

“We’ve been on the other side of the table and now we’re on the same side,” said Arnold, an outspoken Trump critic. “It’s on! I hope he [Trump] sees the picture of me and Michael Cohen and it haunts his dreams.”

Vice announced in May that it had tapped Arnold to helm a show called “The Hunt for the Trump Tapes,” and investigate whether rumored tapes from the past showing the president in a negative light actually exist. Arnold would not say whether Cohen was planning to give him any tapes he might have of conversations with Trump.