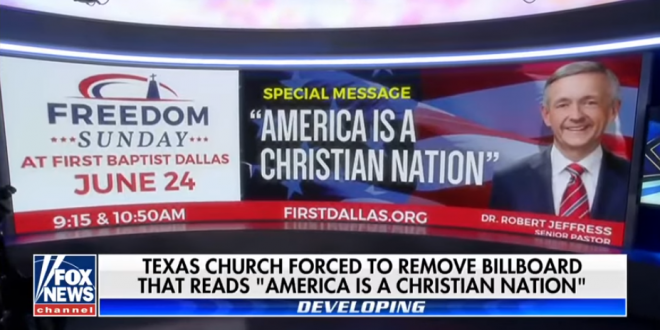 TEXAS: Megachurch Pastor Screams Oppression Over Removal Of His “America Is A Christian Nation” Billboard

Billboards promoting a celebration of faith and freedom at the First Baptist Church in Dallas were removed after complaints from Dallas Mayor Mike Rawlings and the Dallas Morning News. The patriotic billboard campaign included the title of the sermon Dr. Robert Jeffress planned to deliver on June 24 – “America is a Christian Nation.”

Columnist Robert Wilonsky started the controversy with a scathing column on June 7 titled, “First Baptist pastor Robert Jeffress’ gospel of division does not represent my Dallas.” Wilonsky was apparently triggered by the patriotic billboard while stuck in traffic and suffered a massive microaggression.

Consider this your semi-regular reminder that Jeffress, Fox News’ go-to religious authority, is among this city’s most divisive voices. Nothing he says shocks me anymore. I mean, this is a preacher — a follower of Christ — who actually said, “America is not a church where everyone should be welcomed regardless of race and background.” Which is the opposite of Hebrews 13:1. And, I think, the rest of the Bible.

Still, the billboard caught me off-guard. I took a picture while in standstill traffic, then tweeted it when I got home. Sent to a friend who used to attend First Baptist — used to. Even dispatched to some city leaders, among them Mayor Mike Rawlings, whose grandfathers were Nazarene ministers, and who speaks often of being a follower of Christ.

“I don’t mind someone being proud of the Christian tradition in America — it’s obviously there,” said Rawlings. “But one of the strengths of Dallas is our faith-based community [and] it’s the strength that makes us a city of love versus a city of hate.”

Jeffress has been outrage-touring right wing outlets ever since the billboard came down. A second billboard company has reportedly offered to post his message in 20 locations versus the original two purchased by Jeffress.

Let me check with my rabbi. pic.twitter.com/6ODOXLB5Y2

On #TheStory, @robertjeffress said a columnist for the Dallas Morning News called him a "bigot" for declaring "America Is a Christian Nation," and that Dallas Mayor Michael Rawlings called his billboard to advertise "Freedom Sunday" "divisive" and characterized it as hatred. pic.twitter.com/1G0oTAIFew

Fundamentalist pastor @robertjeffress had his Christian nationalist billboards taken down in Dallas. He claims it's an attack on religion…

I'm with Dallas Mayor @Mike_Rawlings: "That is not the Christ I follow."