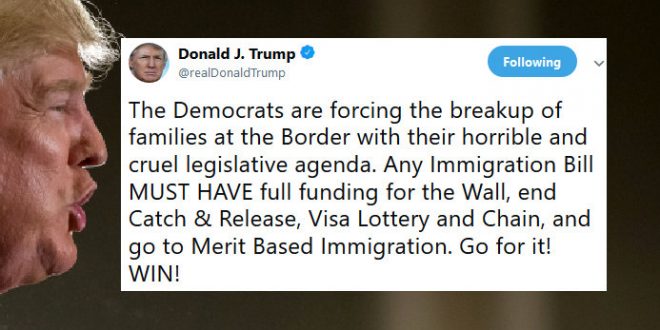 Instead, the increase in family separation, which has seen hundreds of immigrant children detained and kept apart from their parents, comes from a zero-tolerance policy introduced by the Trump administration and Attorney General Jeff Sessions.

Trump instead blamed Democrats. “The children can be taken care of quickly, beautifully, and immediately. The Democrats forced that law upon our nation. I hate it. I hate to see separation of parents and children,” Trump inaccurately said.

The Democrats are forcing the breakup of families at the Border with their horrible and cruel legislative agenda. Any Immigration Bill MUST HAVE full funding for the Wall, end Catch & Release, Visa Lottery and Chain, and go to Merit Based Immigration. Go for it! WIN!

We all have a duty to fight back against Trump's vicious lies on border separations of families. He wants your silence and your acceptance of this horribly cruel policy change.

Here's a rare case of Trump being directly confronted by reporters about one of his lies. His response: repeating the lie more slowly. https://t.co/sbAdcIhcEu