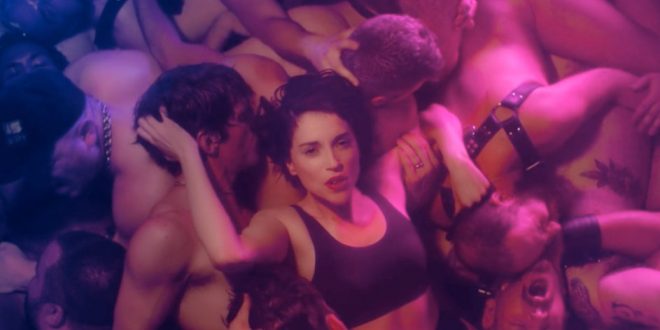 St. Vincent has unveiled a visceral, sexy new video for “Fast Slow Disco,” a reworking her Masseduction cut “Slow Disco.” The Zev Deans-directed video finds St. Vincent performing the song in a packed gay club, sweating, dancing and singing alongside a throng of men clad in either leather, or very little else.

The clip is blast of queer euphoria, capped off by St. Vincent crowdsurfing on top of the arms of the revelers. Upon releasing “Fast Slow Disco,” St. Vincent said, “I always felt this song could wear many different outfits and live many different lives. Here she is in disco pants, sweating on a New York dance floor.”

A NYC friend writes: “I know about ten of these guys.”

Previous Bolton To Visit Moscow To Broker Summit With Putin
Next Texas State GOP: Ban All LGBT Rights And Protections