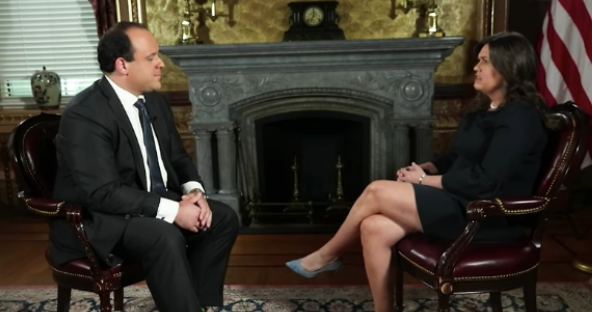 Sinclair Airs “Must Run” Interview With Sanders, Who Is Being Victimized By The “Despicable” Media [VIDEO]

“I think some people, Democrats in particular, at some point they’re going to have to decide if they love our country more than they hate this president. And I hope that they’ll make the right decision in that process. But there’s certainly a lot of anger and a lot of hostility, and I think in large part it’s because they’ve got somebody like President Trump, who always beats them at their own game. He always overcomes the things that they say are not possible.

“I mean, every single time that they try to tell him he can’t do something or that really bad things are going to happen, he proves them wrong, and I don’t think that they like that a lot. I’m a pretty, I think, happy person. I love life. And I’m a lot nicer, I think, than they make me out to be in the press.” – Sarah Huckabee Sanders, in “must run” interview with Sinclair host Boris Epshteyn, who opens by saying that the way the media treats her is “disrespectful and despicable.” Watch the clip, seriously.