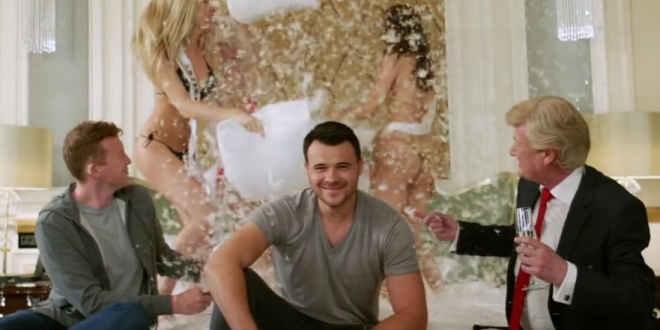 A Russian singer linked to the infamous 2016 Trump Tower meeting released a music video Monday trolling the allegations of ties between the Trump campaign and Russia and depicting figures from adult film star Stormy Daniels to President Trump himself.

Emin Agalarov, whose message to music publicist Rob Goldstone set off the chain of events leading to the New York meeting between Russian lawyer Natalia Veselnitskaya and Trump campaign officials, references some of the allegations surrounding possible Russian collusion throughout the video for “Got Me Good.”

The opening of the video for “Got Me Good” features an unidentified computer hacker watching security camera footage of Emin and an actor portraying Donald Trump as they enter a hotel. Upon entering a hallway, Emin hands Trump a briefcase. Soon after — following a snippet of footage of the real Ivanka Trump — Emin and the actor portraying Trump are shown in a hotel room, where they are joined by three women. The hacker, in his bunker, digitally removes Trump from the footage, as the words “TRUE_FAKE” appear on a screen.

Shortly after the scene, an actress portraying Hillary Clinton and another portraying Ivanka Trump faire la bise in a dark club before taking a shot of alcohol. Several shots of spycraft-ish behavior — dead drops, hand offs — follow, before the Trump-erasing hacker is revealed to be an actor portraying Kim Jong-Un. All told, the video is nearly nonsensical, except for the ham-fisted allusions it makes to Emin Alagarov’s connection to several key points in the investigation of Robert Mueller.

An actress playing Ivanka appears and another surreptitious exchange is made. We then see Emin, Trump, an actor playing Mark Zuckerberg (!) and the beauty pageant contestants (who we’re led to believe might actually be prostitutes) popping bottles in a hotel suite.

The bikini-clad women start jumping on the bed and a pillow fight breaks out. We’re now deep in pee tape territory, but wait … Kim erases Trump from the footage! (Zuckerberg remains.) An actress playing Stormy Daniels walks into the hotel. Emin pays her off in the elevator.

An actress playing Hillary Clinton appears. Emin and Ivanka greet her before sitting down in the a club to take shots. Zuckerberg shows up again with what could be the Steele dossier. It changes hands several times.

Back in 2013 Trump himself appeared in one of the singer’s music videos. The singer’s father owns the venue that hosted that year’s Miss Universe pageant.