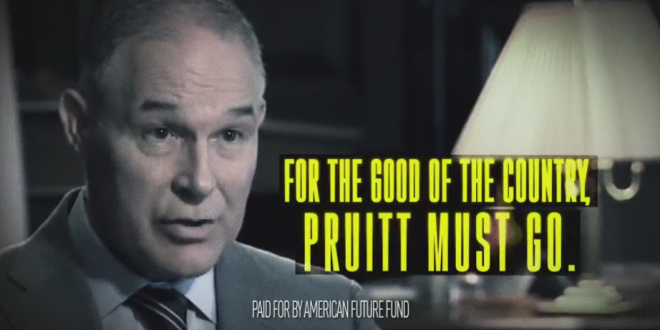 A conservative activist group is out with a new television commercial calling on President Trump to fire his embattled Environmental Protection Agency (EPA) head Scott Pruitt.

“EPA Administrator Scott Pruitt is embarrassing President Trump,” the voiceover in the advertisement by the American Future Fund (AFF) says before running through some of Pruitt’s recent high-profile scandals, like spending $43,000 on a soundproof phone booth for his office and giving big raises to close aides by bypassing the White House.

“Mr. President, you know what to do,” the voiceover says, cutting to a clip of Trump from “The Apprentice” saying “you’re fired!” “For the good of the country, Pruitt must go,” the spot concludes.