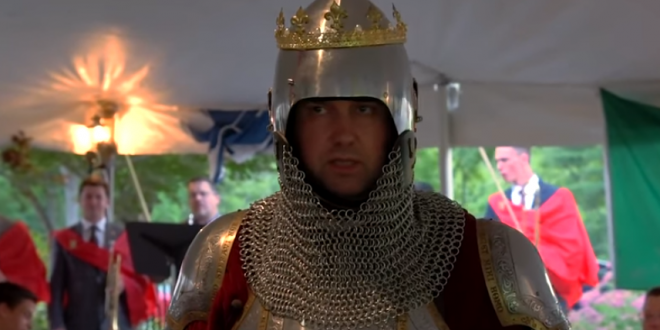 Just in from the red-caped Catholic loons:

Each camp has its own theme and this year was dedicated to Catholic England, a topic that resonates with America’s British roots. Throughout the program, educational talks recounted the lives of England’s greatest Catholic heroes for the boys to admire and imitate. They followed the Irish monk Saint Brendan on his voyage to the new world, 300 years before Christopher Columbus, and King Richard the Lionheart’s legendary exploits on the Third Crusade.

They had a ringside seat to the great turmoil surrounding King Henry VIII’s schism from Rome, resulting in the martyrdom of St. Thomas More and St. John Fisher whose steadfast loyalty to the papacy never wavered. They listened attentively to the history of brave priests such as St. John Ogilvie and St. Edmund Campion who risked their lives to minister to underground Catholics, often under the very noses of Protestant priest hunters.

At last year’s chivalry camp, you may recall, the boys reenacted battles against “sacrilegious Moslems” during the Crusades. As you’ll see in the second clip below, the group also recently staged a large protest against the Metropolitan Museum’s “blasphemy.”

Previous Dems React To JacketGate With “We Care” Shirt
Next Tired Old Queen At The Movies: The Boys In The Band