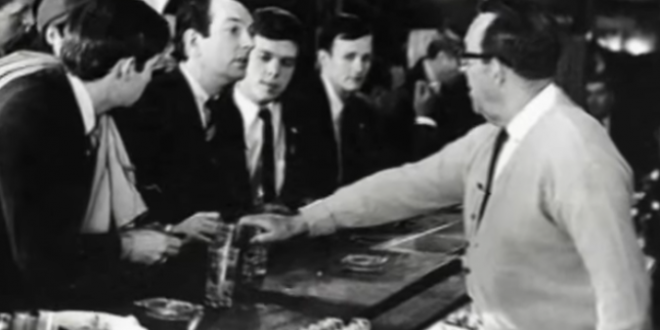 Dick Leitsch, who became a leading gay rights activist in 1960s New York, where he helped end police entrapment of gays and organized the first major act of civil disobedience by a gay rights group — a boozy sit-in known as the Sip-In — died June 22 at a hospice center in Manhattan. He was 83. The cause was liver cancer, said a niece, Cheryl Williams.

A bartender, freelance journalist and onetime Tiffany sales representative, Mr. Leitsch was a self-described “hick from Kentucky who didn’t known anything about gay rights” when he followed a boyfriend to New York in 1959. He soon became a member and young leader of the Mattachine Society, an early gay advocacy group named after a group of medieval jesters who, disguised by masks, protested the oppression of peasants.

On April 21, 1966 members of the New York Chapter of the Mattachine Society staged a “Sip-In” at the bar which was to change the legal landscape.  Dick Leitsch, Craig Rodwell, the society’s president and vice president respectively, and another society activist, John Timmons, planned to draw attention to the practice by identifying themselves as homosexuals before ordering a drink in order to bring court scrutiny to the regulation [against serving gays]. The three were going to read from Mattachine stationary “We are homosexuals. We are orderly, we intend to remain orderly, and we are asking for service.”

The three first targeted the Ukrainian-American Village Restaurant at St. Mark’s Place and Third Avenue in the East Village, Manhattan which had a sign, “If you are gay, please go away.” The three showed up after a New York Times reporter had asked a manager about the protest and the manager had closed the restaurant for the day. They then targeted a Howard Johnson’s and a bar called Waikiki where they were served in spite of the note with a bartender saying later, “How do I know they’re homosexual? They ain’t doing nothing homosexual.”

Frustrated, they then went to Julius, where a clergyman had been arrested a few days earlier for soliciting sex. A sign in the window read, “This is a raided premises.” The bartender initially started preparing them a drink but then put his hand over the glass which was photographed. The New York Times ran a headline the next day “3 Deviates Invite Exclusion by Bars.”

The Mattachines then challenged the liquor rule in court and the courts ruled that gays had a right to peacefully assemble, which undercut the previous State Liquor Authority contention that the presence of gay clientele automatically was grounds for charges of operating a “disorderly” premise. With this right established a new era of licensed, legally operating gay bars began. The bar now holds a monthly party called Mattachine.

Dick Leitsch: “You’re in the oldest continually operating gay bar in New York City…Not only is it a gay bar, it’s a historic site. It’s important to know there’s a pre-Stonewall history of activism, of rich life in New York City.” #LGBTQPrideMonth https://t.co/ce8YP6pEjD

Gay bars were illegal when Dick Leitsch and the Mattachine Society staged a “sip in” at Julius’. Their rebellion inspired a movement, which started a riot three years later at Stonewall. He is #NYCPride. pic.twitter.com/DwQeSnB2uI

The legendary Dick Leitsch, who served as president of The Mattachine Society and organized the famous Julius’ Sip-In, visited the #BoysintheBand last night and we were honored to have him. 📸 @AndrewRannells pic.twitter.com/Cy7C02Z0wq

Dick Leitsch, an early gay-rights activist, who is now in his eighties, arranged to donate his old working files to the archives of the New York Public Library: https://t.co/qaalSL94Oi pic.twitter.com/kTWaOYM5D7

I just presented a NY Senate proclamation to gay pioneer Dick Leitsch making it “Julius’ Bar Day” in recognition of the 52nd anniversary of the famous “Sip-In” he organized here that helped launch the LGBTQ civil rights movement 🏳️‍🌈✊🏻💓@JULIUSBARNYC@nyclgbtsites#Resist pic.twitter.com/NQBcEH04dV

Previous Alex Jones: The Pentagon Has Weaponized Perfumes That Turn Men Gay So They Don’t Have Children
Next CHATTER AWAY: Overnight Open Thread