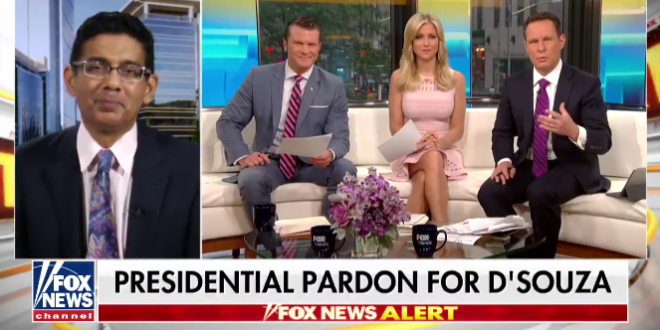 “The president said, ‘Dinesh, you’ve been a great voice for freedom.’ And he said that, ‘I got to tell you, man-to-man, you’ve been screwed.’ He goes, ‘I’ve been looking at the case. I knew from the beginning that it was fishy.’ But he said upon reviewing it he felt a great injustice had been done and that using his power he was going to rectify it, sort of clear the slate. And he said he just wanted me to be out there to be a bigger voice than ever defending the principles that I believe in.” – Felon Dinesh D’Souza, speaking this morning on state television.

.@DineshDSouza on @foxandfriends: “The president said: ‘Dinesh, you’ve been a great voice for freedom.’” https://t.co/mHNMj01oRw pic.twitter.com/quDeGGgb6t

Previous Trump: Why Hasn’t Samantha Bee Been Fired?
Next Mother Of Texas School Shooting Victim Meets Privately With Trump: It Was Like I Was “Talking To A Toddler”