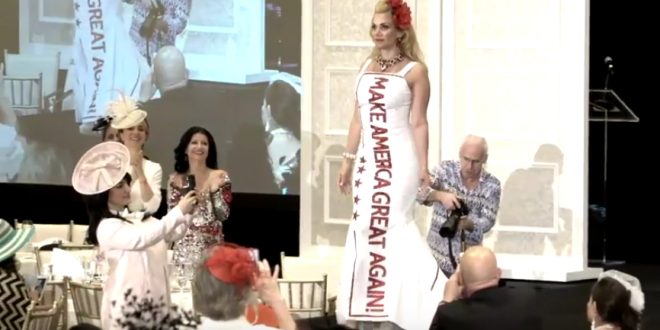 The North Korean national anthem got plenty of fanfare at the Virginia Women for Trump’s birthday party for the president on Sunday. Corey Stewart, the Republican Senate candidate from Virginia, got the hook. The Tea for Trump toast to an absent President Trump drew hundreds of women in hats, tats and floral finery to the Trump International Hotel for an afternoon of what Alice Butler-Short, the organization’s president, called “God, fashion and politics or God, politics and fashion, whichever.”

Ms. Alice Butler-Short took the stage, her substantial, bejeweled gold lamé millinery bobbing. “That signified our great president and the negotiations he is having with North Korea,” she said. The music, she explained, was the North Korean national anthem. Some time after that, the Deplorable Choir from Houston, three women in red dresses and fringed red cowboy boots, took the stage, saying, “We’ve been called every name in the book and we know that’s not true.”

Attendees also heard from a plethora of pro-Trump speakers and Trump-supporting candidates including Corey Stewart, who is running for U.S. Senate in Virginia, and Antonio Sabàto Jr., who is pursuing a U.S. House seat in California. Stewart thanked Alice Butler, who founded Virginia Women for Trump, with a bouquet of yellow flowers and approached the podium to an enthusiastic audience that was seemingly unfazed by reports of Stewart’s deep tie-ins to white supremacists.

YouTube duo Diamond & Silk (Lynnette Hardaway and Rochelle Richardson), who testified before Congress earlier this year after Facebook mistakenly flagged their fan page, were perhaps the biggest draw of the event and stepped on stage to a standing ovation. In attendance was “Pizzagate” revisionist Jack Posobiec, who spoke briefly deriding “fake news” and promoting his new employer, One America News. Other self-ascribed “New Right” figures Cassandra Fairbanks and Will Chamberlain were seated near the back of the ballroom.

The original MAGA dress also was at the Trump Hotel DC for Tea for Trump birthday extravaganza. Designed by Andre Soriano and modeled by conservative pundit Jessie Jane pic.twitter.com/N7MtsiPngY

At the Virginia Women for Trump’s “Tea for Trump” birthday party, a white model dressed in Asian clothing walked down the runway.
Then founder walked out to the North Korean national anthem.
This was followed by the “Deplorable Choir” from Houston. pic.twitter.com/GOJtxc2C8C

Yesterday, nearly a thousand Republican women adorned themselves with fancy hats and fascinators to attend a belated birthday party for President Trumphttps://t.co/moM6AABPVk

Tea for Trump was the best MAGA event since Deploraball

Jack Posobiec at Tea for Trump: Could you imagine Jeb Bush accomplishing any of this? pic.twitter.com/sVOtaTxZlN

Previous Dem Lawmaker Claims She Stopped Hurricanes, Binds Satan In Jesus’ Name By Blocking Him On Facebook
Next Alex Jones: Leftists Will Stage A False Flag Firebombing Of The Red Hen Eatery In The Next 48 Hours [VIDEO]