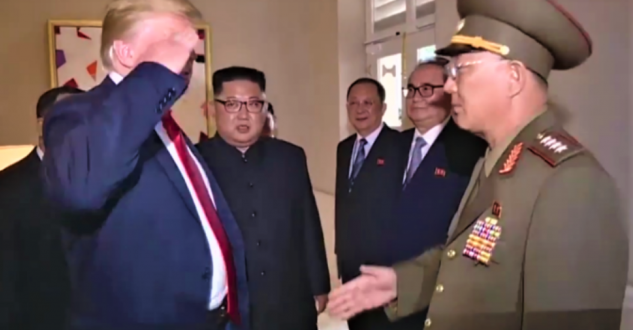 And again we say “OMG if Obama had done this?”

In parts of the lengthy, 42-minute long video from North Korea’s KCTV news channel, Kim can be seen shaking Trump’s hand before the president turns to shake the hand of a North Korean officer standing next to Kim.

The officer, confused, salutes Trump instead, prompting the president to salute back. U.S. presidents generally salute U.S. service members, but do not salute members of other nation’s militaries.

North Korean TV has aired its first footage of the #TrumpKimSummit. Look out for the handshake/salute confusion 55 seconds in. pic.twitter.com/JS5yEUprgz

I give you, the President of the United States. pic.twitter.com/wNMshLex1P