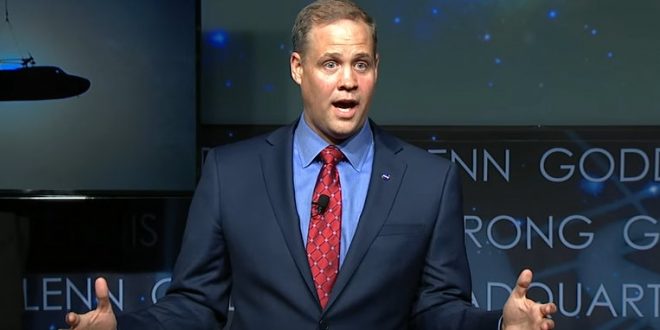 NASA is talking to several international companies about forming a consortium that would take over operation of the International Space Station and run it as a commercial space lab, NASA Administrator Jim Bridenstine said in an interview.

“We’re in a position now where there are people out there that can do commercial management of the International Space Station,” Bridenstine said in his first extensive interview since being sworn in as NASA administrator in April. “I’ve talked to many large corporations that are interested in getting involved in that through a consortium, if you will.”

The White House touched off a heated discussion about the future of the orbiting laboratory earlier this year when it said it planned to end direct government funding of the station by 2025, while working on a transition plan to turn the station over to the private sector.

Bridenstine, not fucking incidentally, was nominated by Trump to run NASA despite his utter lack of science or engineering knowledge and his denial of climate change. NASA, as you surely know, conducts much of the federal research on the climate.

Shortly after his nomination, Bridenstine deleted his entire social media presence, doubtlessly to thwart Senate questioning. He was approved in 50-49 vote and is the first former member of Congress to head NASA.