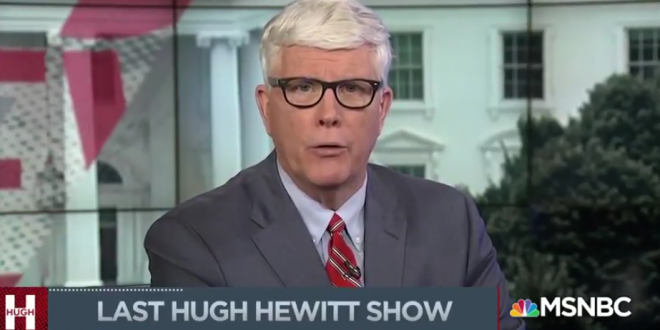 MSNBC has cancelled that weekly television show hosted by right-wing pundit Hugh Hewitt, the conservative explained at the end of his final show on Saturday. “This has been the last Hugh Hewitt Show on Saturday mornings,” Hewitt explained.

He said that NBC News would continue to employ him as a contributor and he said he expects to continue to be a guest on MSNBC shows. “It’s been great fun to host this show, I’ll see you on MSNBC again soon” the former anchor said.

As a reminder, this happened last month:

MSNBC has admonished weekend host Hugh Hewitt for lobbying EPA head Scott Pruitt to clean up a polluted site near Hewitt’s home in California. In a statement released Wednesday, a spokesperson for MSNBC said that Hewitt “was given a verbal warning as such activity is a violation of our standards.”

The revelation of a request for a meeting between Pruitt and Hewitt’s law firm came earlier this week after a cache of internal emails was released as a result of a Freedom of Information Act lawsuit by the environmental group The Sierra Club.

Previous Ingraham And Conway Agree: Trump Should Stop Calling The Press “The Enemy Of The People” [VIDEO]
Next Madonna Ordered To Stop “Harassing” Neighbors