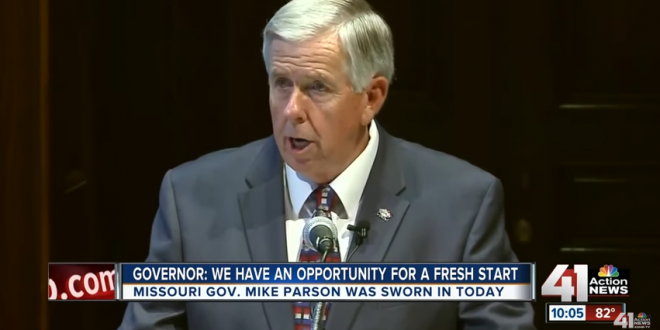 Promising a “fresh start” for state government after months of scandal, Mike Parson was sworn in today as Missouri’s 57th governor.

“My pledge to all Missourians is to work hard each and every day to bring honor, integrity, transparency to the Governor’s Office,” Parson said moments after taking the oath of office, later adding: “Now is the time for Missouri to come together, to work together and to help one another.”

Parson is a farmer from Bolivar and former sheriff who served 11 years in the General Assembly before being elected lieutenant governor in 2016. He takes over for Eric Greitens, who stepped down at 5 p.m. Friday as part of a plea deal to dismiss a felony charge associated with allegations that he stole a veterans charity’s donor list to use for his 2016 campaign.

As of now, there is no process in Missouri statutes to fill a lieutenant governor’s vacancy. Sen. Bob Dixon, R-Springfield, filed a bill earlier this year that would require a governor to hold a special election under certain circumstances if the lieutenant governor’s post is vacant, but the measure failed to pass.