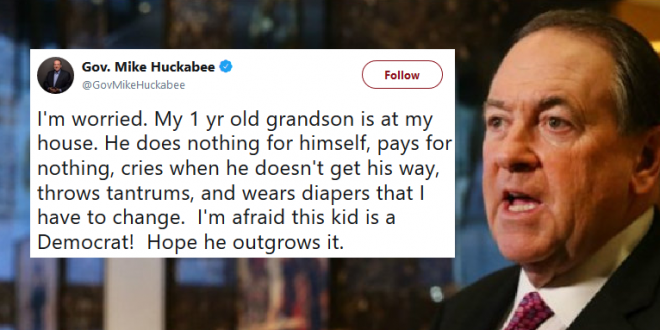 Just when you thought the “to own the libs” meme couldn’t get more out of hand, former Arkansas governor Mike Huckabee mocked his one-year-old grandson today by suggesting he is lazy and might be “a Democrat.” While Huckabee is known for his nonsensical, cringe-inducing dad humor, his jokes just haven’t been landing recently.

I’m worried. My 1 yr old grandson is at my house. He does nothing for himself, pays for nothing, cries when he doesn’t get his way, throws tantrums, and wears diapers that I have to change. I’m afraid this kid is a Democrat! Hope he outgrows it.

Previous Trump: Journalists Shouldn’t Have To Fear Violence
Next Comedian Claims He Prank Called Trump On Air Force One By Pretending To Be Democratic Senator [AUDIO]