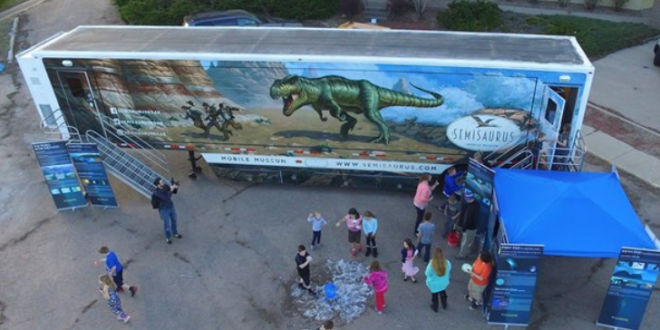 Apparently men wearing 19th century suits were once chased around the American frontier by dinosaurs.

North Hills Baptist Church in Lingle, Wyoming has brought the Semisaurus mobile creationism museum for its vacation Bible school this weekend, which will be open to the public. Brian Young, a former teacher and the director of the Creation Instruction Association based out of Hastings, created the museum as an outreach for his ministry. Young said he created the exhibit as a counterpoint to the teaching of evolution. “I believe that creation is a religion, but so is evolution,” he said. “The only difference is, only one religion is allowed to be taught to the kids.”

As you can see in the second clip below, Young also focuses on the evil of homosexuality, but so far it doesn’t look like we’ve merited a rolling semi-truck museum