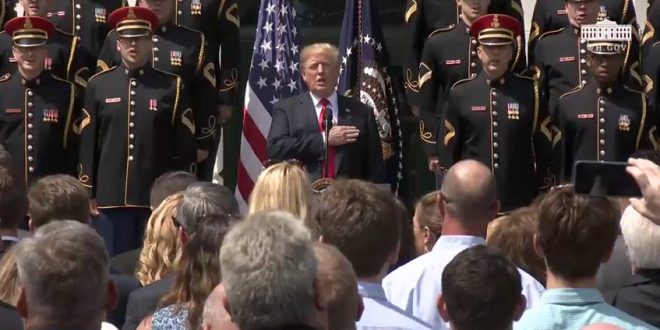 President Trump said on Tuesday that the United States Marine Band would “proudly” play the national anthem at the White House during an afternoon event that had originally been planned as a celebration of the Philadelphia Eagles’ Super Bowl victory.

In early-morning tweets, Mr. Trump obliquely questioned the patriotism of the Eagles and other N.F.L. players, some of whom have said they plan to stay in the locker room at the beginning of games when the national anthem is played.

“We will proudly be playing the National Anthem and other wonderful music celebrating our Country today at 3 P.M.,” Mr. Trump said in one tweet. “The White House, with the United States Marine Band and the United States Army Chorus. Honoring America! NFL, no escaping to Locker Rooms!”

UPDATE: Well, that was short. Scroll back on the clip.