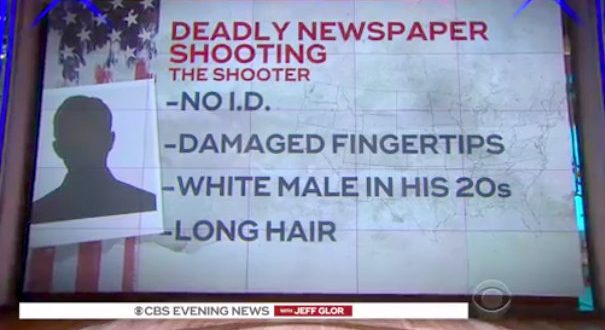 The suspect accused of killing five people in a shooting at a Maryland newspaper had damaged the tips of his fingers in an apparent attempt to thwart efforts by police to identify him by his fingerprints, a law enforcement officials tells CBS News. Authorities said the suspect is a white male in his 20s who they have not yet identified.

Police say the suspect opened fire Thursday afternoon at the offices of the Capital Gazette newspaper in Annapolis, killing five and injuring several others. He was taken into custody at the scene and is not cooperating with investigators, police said. CBS News’ Jeff Pegues reports that the suspect was caught hiding under a desk.

The suspect did not have identification on his person. He’s described as having long hair. A law enforcement source says authorities are using other means of identifying him, including facial recognition technology to search databases of passports and driver’s licenses.

Previous Homocon Milo: I Was Joking About Shooting Journalists
Next CHATTER AWAY: Overnight Open Thread