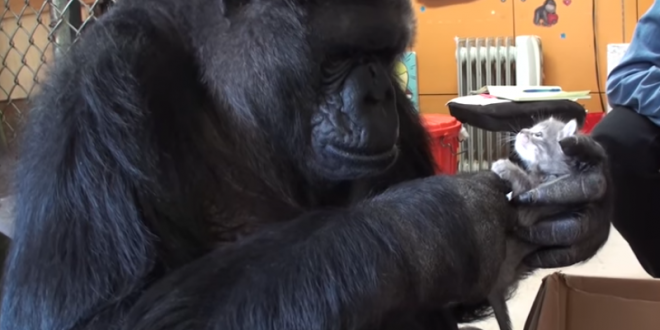 “The Gorilla Foundation is sad to announce the passing of our beloved Koko,” the research center says, informing the world about the death of a gorilla who fascinated and elated millions of people with her facility for language.

Koko, who was 46, died in her sleep Tuesday morning, the Gorilla Foundation said. At birth, she was named Hanabi-ko — Japanese for “fireworks child,” because she was born at the San Francisco Zoo on the Fourth of July in 1971. She was a western lowland gorilla.

“Her impact has been profound and what she has taught us about the emotional capacity of gorillas and their cognitive abilities will continue to shape the world,” the Gorilla Foundation said.

Koko was believed to have had an IQ of between 75 and 95 and could sign more than 1,000 words. The average IQ of a human is around 90 to 110. She also understood spoken English.

Born at the San Francisco Zoo, the gentle, nearly 300-pound ape began learning sign language as a baby in 1974 from Dr. Francine “Penny” Patterson as part of a Stanford University project. She spent her entire life in captivity and became a celebrity in her own right.

Her remarkable ability to sign landed her on the cover of National Geographic twice — in 1978, in a photo she took of herself in a mirror, and again in 1985, with an image of her mourning the death of one of her pet kittens.

Koko the gorilla, who appeared on our cover, could chat, tease, and even argue with scientists using sign language. She has died at the age of 46. pic.twitter.com/JX9vlFzpiI