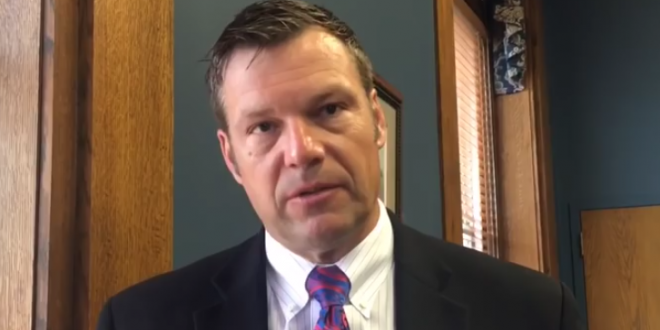 The Kansas Court of Appeals ruled Friday that a citizen-initiated grand jury petition can investigate Secretary of State Kris Kobach on allegations that he intentionally failed to register qualified voters. Petitioner Steven Davis gathered enough signatures to file a petition in Douglas County Court in August 2017. The petition sought a grand jury investigation of Kobach for destroying online voter registrations, preventing Kansans from voting, and “being grossly neglectful” in his election duties.

The American Civil Liberties Union sued Kobach on behalf of voters who were denied voter registration in a case challenging the state’s voter ID law. Trial was held in federal court in March and is awaiting a decision by U.S. District Court Judge Julie Robinson.

Kobach, who is running for governor, insists that the law prevents noncitizens from illegally voting. He was the driving force and vice chairman of President Donald Trump’s Commission on Election Integrity, which Trump created to buttress his claim that he lost the popular vote for president by 3 million votes in 2016 only because of voter fraud. The commission was dissolved before it ever met.

Kansas Secretary of State Kris Kobach used state tax dollars to comply with a federal magistrate’s order to pay a $1,000 fine for misleading the court about documents in a folder he carried into a meeting with Donald Trump shortly after the Republican was elected president.  Micah Kubic, executive director of the ACLU of Kansas, said three weeks ago Kobach had paid the penalty “out of his own pocket.”

However, a Kansas Open Records Act request of the Kansas Department of Administration produced records Friday showing the payment was processed July 21, 2017, with a credit card issued by the state to Craig McCullah, who at that time was deputy assistant secretary of state under Kobach and is now seeking the Republican Party’s nomination as secretary of state.