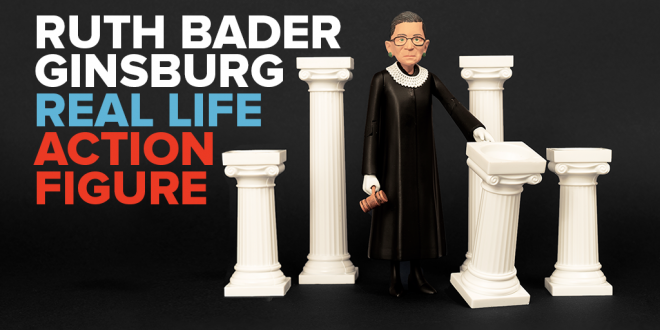 Not to get judgy about a judge, but these Ruth Bader Ginsburg action figures win on appeal. The Supreme Court associate justice, 85, has been re-created in action-figure form by Seattle sculptor Mike Leavitt for product incubator FCTRY, which has also made figures of Barack Obama, Bernie Sanders, Hillary Clinton and other famous names that certain of your Facebook friends will love, and others will hate.

The Bader Ginsburg Kickstarter project started on June 5, setting a goal of $15,000 that needed to be reached for the figures to be created. It quickly obliterated that goal, and as of June 15, backers pledged $233,989, with 25 days remaining in the campaign. Bader Ginsburg also made the news recently because to the 2018 documentary RBG, which premiered at the Sundance Film Festival and is now in theaters. Previous Trump: My Supporters Are The Smartest In History
Next Kardashian On Running For Office: Never Say Never