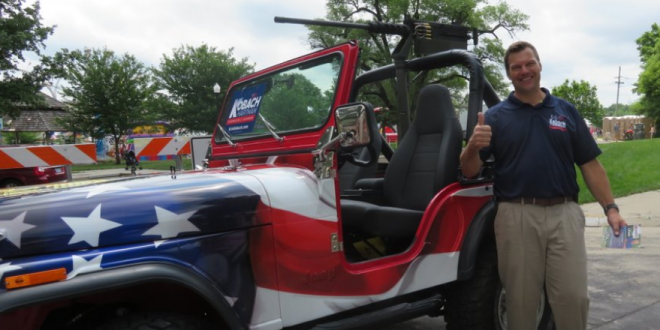 Kansas Secretary of State Kris Kobach has brought his Jeep to another parade. This time, in Lecompton. The Jeep, which Kobach previously described as a “souped up Jeep with a replica gun,” caused some to be concerned at a parade in Shawnee last weekend.

Then, it sparked what Kobach called “outrage” after pictures of it began circulating on social media. He had said that weekend, “The outrage over the replica gun on the back of a patriotic jeep is the left trying to attack guns and your #2A rights. I will not back down in the face of a snowflake meltdown and outrage culture.”

Yesterday, we took the Jeep on a whirlwind tour for parades in LeCompton and Westmoreland and at a candidate meet and greet in Netawaka. Don’t believe the outrage of a few is the opinion of the rest of us. The Jeep is a celebrity. Lots of requests for photos with it. #ksleg #2A pic.twitter.com/rzOJYubpX3

You won’t want to miss Uncle Ted when he comes to Lenexa in support of #TeamKobach on June 23! Order tickets today to support the campaign with @TedNugent! https://t.co/WyLuSvInAo pic.twitter.com/LIs9wMDH7m

Had a great time at the range with Sheriff Frank Kelly of Miami County this morning! #TeamKobach #ksleg #ksgov #2A #backtheblue pic.twitter.com/PskYJvw6cY

Previous Sen. Richard Blumenthal Blasts Sessions For Ending Asylum: The Blood Of Refugees Is On Your Hands
Next Trump Mocks “Haters And Losers” From Singapore