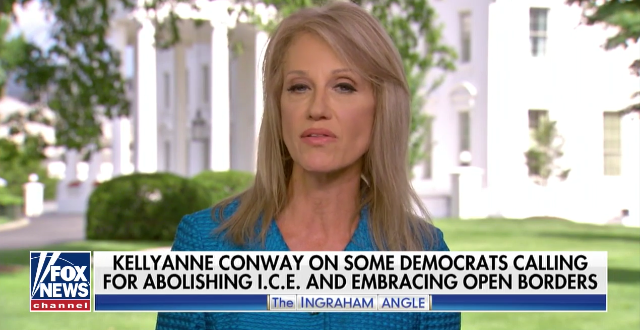 Ingraham And Conway Agree: Trump Should Stop Calling The Press “The Enemy Of The People” [VIDEO]

Kellyanne Conway is claiming that she’s actually called for Trump to stop attacking the press as enemies of the people.

Conway appeared on Fox News’s “The Ingraham Angle” on Friday, one day after a gunman killed five people at the offices of The Capital Gazette newspaper in Annapolis, Md. Ingraham asked Conway if the president is “reconsidering his language” toward the press in light of the incident.

“I don’t really like any of it,” Ingraham said, referring to both the president’s use of “enemy of the people” to refer to the media and critics who refer to Trump as a “Nazi.” “I think all of it has gotten way out of line,” she said. Conway, who agreed, in response referred to Trump’s comments at a White House event earlier in the day, where he said journalists should be “free from the fear of being violently attacked while doing their job.”

Conway said she’s called for “tamping down the rhetoric,” but blamed reporters for playing a part in the tensions between the press and the administration. “Those who actually call for it sometimes, if you listen carefully enough you look at their own social media feeds, they give license sometimes to something I think is a little bit hotter than covering the next story,” Conway said.