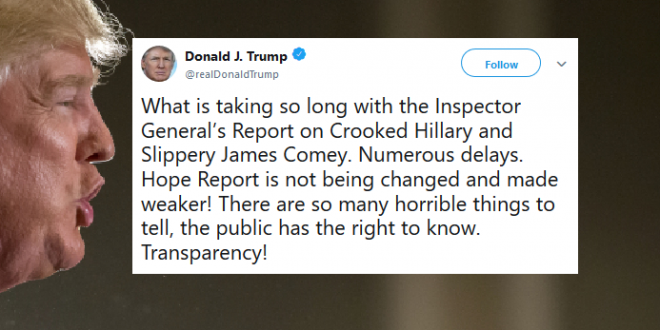 President Trump said in an early morning tweet on Tuesday that he hopes the inspector general’s report on his former rival, Hillary Clinton, and former FBI director James Comey is not being delayed to make it “weaker.” Inspector General Michael Horowitz told lawmakers last month that a draft of the report was finished. It is expected to be critical of Comey for taking various actions, including his announcement in July 2016 recommending that charges not be filed against Clinton.

What is taking so long with the Inspector General’s Report on Crooked Hillary and Slippery James Comey. Numerous delays. Hope Report is not being changed and made weaker! There are so many horrible things to tell, the public has the right to know. Transparency!