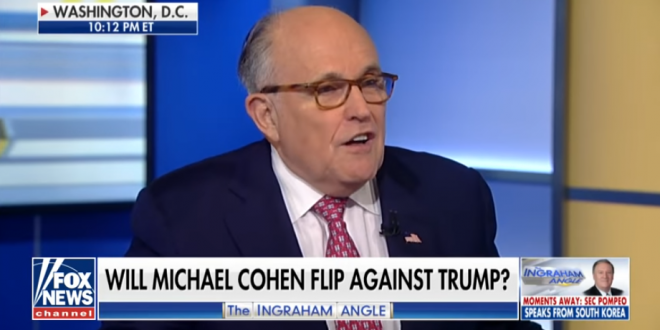 “I checked into this last night. It’s not so,” Giuliani told Laura Ingraham of Fox News. The former New York mayor is one of the president’s chief attorneys fending off the special counsel’s investigation into potential collusion between Russian actors and Trump’s campaign in the 2016 election.

“He’s not cooperating, nor do we care because the president did nothing wrong,” Giuliani said of Cohen. “We’re very comfortable if he cooperates that there’s nothing he can cooperate about with regard to President Trump. I am absolutely certain about that form everything I know about that investigation.”

Previous Rick Scott On Pre-Existing Conditions: We’ve Got To Reward People For Taking Care Of Themselves [VIDEO]
Next Avenatti And The Mooch Spar On Colbert Show [VIDEO]