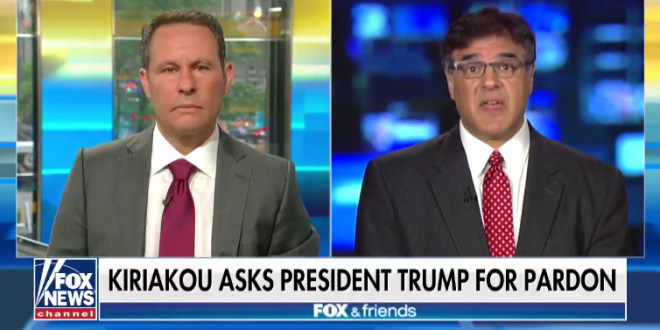 BRIAN KILMEADE (CO-HOST): What are you calling for now, John? You served your time, wrote a book about it, what are you asking for now?

JOHN KIRIAKOU (FORMER CIA ANALYST): I would be forever indebted to the president for a pardon. This president is unlike other presidents. You know, Barack Obama and Bill Clinton, they gave pardons and commutations as they were running out the door at the end of their term. So they didn’t have to face any political fallout. This president is different. This president accepts political responsibility for his decisions. He has been pardoning people since he got into office because he knows that he’s doing the right thing. He sees an injustice and he corrects it. And I’m humbly asking him to correct this.

KILMEADE: And you know what? Open up the case and if what you say is true, I think you certainly have a strong case.

On October 22, 2012, Kiriakou pleaded guilty to disclosing the identity of a fellow CIA officer. He was the first CIA officer to be convicted for passing classified information to a reporter, although the reporter did not publish the name of the operative. He was sentenced to 30 months in prison on January 25, 2013, and served his term from February 28, 2013, until February 3, 2015, at the low-security Federal correctional facility near Loretto, Pennsylvania.

“[John Brennan] had this insane obsession with leaks, except when he was leaking – then it was ok.” –Previously jailed CIA officer @JohnKiriakou pic.twitter.com/4g2Z3SaqVS

Previous Sean Hannity: Mueller’s Witnesses Should Smash Their Phones And Hand Them Over In “Itsy Bitsy Pieces”
Next Hair Furor Rants Again About Mueller Team’s Bias