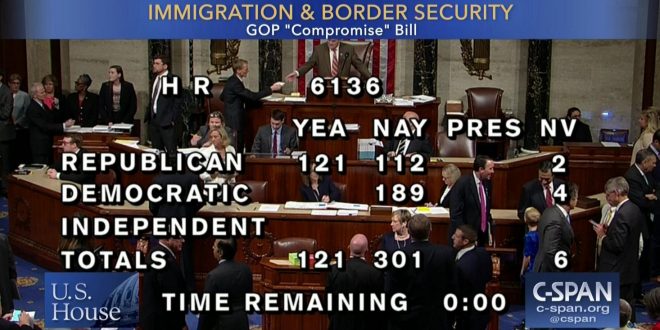 House Republicans have handily failed to pass an immigration bill — again. For the past few weeks Republicans have been furiously negotiating among themselves to develop a “compromise” between conservative and moderate Republicans on immigration. But it wasn’t enough — by a long shot: The bill they voted on Wednesday lost the support of every single Democrat and 112 Republicans. The bill failed 121-301.

The Republican “compromise” immigration bill included a litany of a conservative policy proposals, modeled after the White House’s demands. It would have given DACA-eligible immigrants temporary legal status for six years, after which they could apply for — but would not be guaranteed — a green card.

The bill also called for granting $25 billion in funds for a southern border wall, making it more difficult for migrants to seek asylum, and allowing families to be detained indefinitely at the border in response to the Trump administration’s “zero-tolerance” family separation policy. It also included provisions that would have significantly cut legal immigration levels.

SO MUCH FOR TRUMP’S ALL CAPS RANT.

HOUSE REPUBLICANS SHOULD PASS THE STRONG BUT FAIR IMMIGRATION BILL, KNOWN AS GOODLATTE II, IN THEIR AFTERNOON VOTE TODAY, EVEN THOUGH THE DEMS WON’T LET IT PASS IN THE SENATE. PASSAGE WILL SHOW THAT WE WANT STRONG BORDERS & SECURITY WHILE THE DEMS WANT OPEN BORDERS = CRIME. WIN!