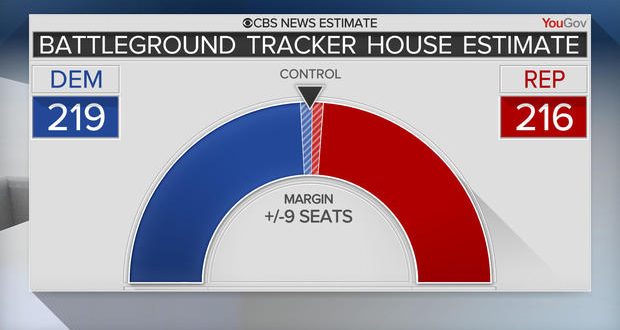 In the race for Congress, most polls report one national percentage for Democrats and Republicans. But that’s not very helpful – because this is a race for seats. 435 of them, in fact. So the CBS News/YouGov Battleground Tracker will report seats: how many districts the Democrats would get, and how many the Republicans would get, as of today.

And we find the 2018 campaign looks like a toss-up contest for control at the moment, as the Democrats would most likely get 219 seats if the election were today (just one more than the 218 needed for a majority) and the Republicans 216. With a margin of error of nine seats on the model, control is totally up for grabs.

This would amount to a sizable gain for Democrats, who currently hold 195 seats (including vacant seats) – yet it just barely puts them in position to take control, given the deficit they have to make up. But it’s not yet the massive “blue wave” that some pundits have speculated will sweep the Democrats to a comfortable majority, despite their high-profile wins and strong turnout in recent special elections.