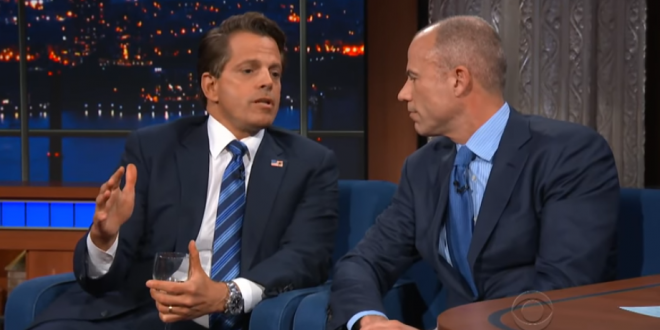 Avenatti And The Mooch Spar On Colbert Show [VIDEO]

Avenatti and Scaramucci are the new Washington It Couple. Recently they were being shopped around to co-host a TV program – like Joe Scarborough and Mika Brzezinski. They also were seen together at parties coinciding with Upfront Week and the White House Correspondents’ Dinner.

“What is this?” Colbert asked to kick things off. “Word is you are shopping a show where the two of you would debate the issue of the day on television.” Avenatti insisted he never would do a show with a guy whose first name is ‘The’. The Mooch said they’re doing a male version of Thelma and Louise.

There was an undeniable fascination to watching Avenatti and The Mooch (which, one suspects, is what their inevitable show will be called) rehash their connections to the various scandals plaguing this most improbably ludicrous of presidencies.

Colbert, to his credit, called his guests’ self-promotion out right at the start, brushing aside their opening salvos with an impatient, “I know you guys have got your schtick, but what is this?” What it turned out to be was pretty predictable, as Avenatti continued his campaign of crowd-pleasing insults against the likes of Trump.