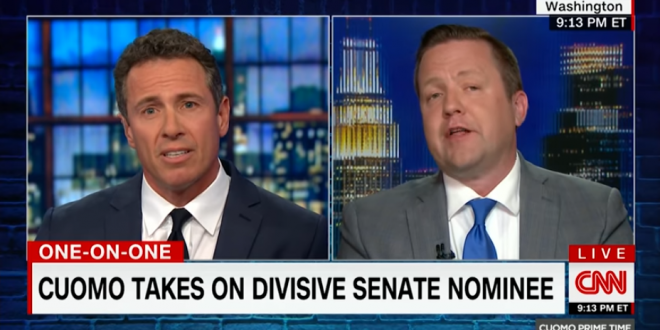 The two men frequently shouted over each other in the interview, with Cuomo repeatedly calling out Stewart’s refusal to condemn white nationalists. “Don’t blame me for being extreme left. Or being some antifa fool,” Cuomo said. “It’s your attempt to deny the facts.” “This is the biggest joke I’ve heard in a long time,” Stewart shot back.

“I take support from whoever wants to give it me. That doesn’t mean I support their views”

Corey Stewart, the man who built his image on championing Confederate symbols and made joint appearances with the white nationalist who organized the Charlottesville white supremacist rally, won the Republican Senate nomination in Virginia. He was endorsed by President Trump pic.twitter.com/eLAOzylhNz

Virginia’s sitting senator approves of and even applauds his son’s participation in a known terrorist organization, #Antifa.

Let that sink in. https://t.co/7foEPLKYHT

Congratulations to Corey Stewart for his great victory for Senator from Virginia. Now he runs against a total stiff, Tim Kaine, who is weak on crime and borders, and wants to raise your taxes through the roof. Don’t underestimate Corey, a major chance of winning!

Previous RNC Chair Ronna McDaniel Issues Ominous Threat: Get On Board The Trump MAGA Agenda Or You Will Be Sorry
Next Rick Scott On Pre-Existing Conditions: We’ve Got To Reward People For Taking Care Of Themselves [VIDEO]