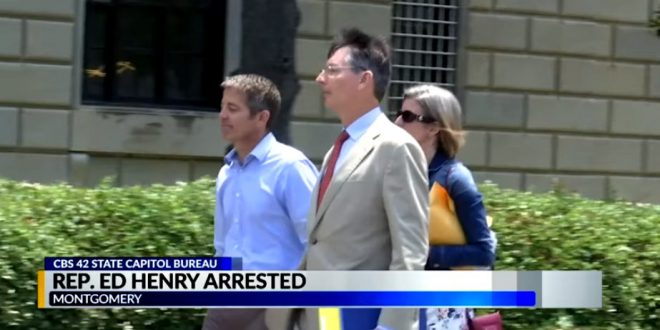 Efforts to reach Henry for comment weren’t immediately successful. However, Henry later posted on Facebook that he is not guilty of any crimes. “For the last 8 years I have fought the government from further encroachment on our Freedoms. Today began my fight with the Federal Government for my freedom. So while I would like to lay everything on the table for all to see, that would not be wise while fighting an opponent that has endless resources like our Government,” the post read.

Henry last appeared on JMG in December when he called for prosecuting Roy Moore’s accusers, saying, “You can’t be a victim 40 years later.”

Long before his high-profile arrest, however, the 47-year-old lawmaker has captured headlines for his outspoken efforts to root out corruption and promote conservative values. His Twitter bio spells out his thoughts: “Trying to hold politicians accountable and make them answer to the people with zero regard for my own political life.”

In 2017, Henry became involved in efforts to oust Gov. Robert Bentley, a fellow Republican, amid controversy surrounding the governor’s personal relationship with adviser Rebekah Caldwell Mason. Henry led the charge to oust Bentley, rounding up 23 votes in the House for an impeachment resolution. Bentley later resigned as part of plea deal in connection to campaign finance and ethics violations tied to the Mason relationship.

It would take a cataclysmic event to save our Nation. Aug 21st 2015 a cataclysm occurred, a movement was born. Thank You ! @realDonaldTrump pic.twitter.com/rC8Lm23cGb

Was a great day in Mobile yesterday with @KellyannePolls and @realDonaldTrump. pic.twitter.com/Raj24IElg1