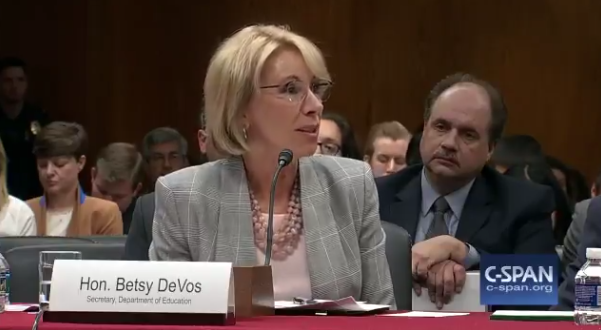 Education Secretary Betsy DeVos, who sparked a firestorm last week when she said it was a school’s choice to call Immigration and Customs Enforcement to report potentially undocumented students, changed her tune Tuesday, telling a Senate subcommittee she doesn’t think schools can call ICE on undocumented students.

DeVos’ reversal came during a tense exchange with Sen. Chris Murphy (D-Conn.), who demanded that DeVos give a yes or no answer to whether the law allows this. DeVos first told Murphy that the 1982 Supreme Court decision in Plyler v. Doe “says students that are not documented have the right to an education.” When pressed for clarification, DeVos said she thinks “a school is a sacrosanct place for students to be able to learn, and they should be protected there.”

Murphy accused DeVos of ducking the question. “I think educators know in their hearts that they need to ensure that students have a safe place to learn,” DeVos responded. Finally, after multiple rounds of prodding and Murphy’s question, “So they can’t call ICE?” DeVos responded: “I don’t think they can.”

Exchange between Sen. @ChrisMurphyCT & Secretary Betsy DeVos on whether teachers should refer undocumented students to @ICEgov.

After a (very long) back-and-forth with @ChrisMurphyCT, DeVos says “I don’t think” a teacher/principal can call ICE to report undocumented students. #devoshearing

Ugh. That wore me out. https://t.co/vCht5eHhMC

I get so frustrated when a witness (especially a Cabinet Secretary) won’t answer a simple question. There’s normally a reason they’re dodging. So today, when DeVos dodged, I just kept pushing. Watch. https://t.co/hiDGcbmHwg