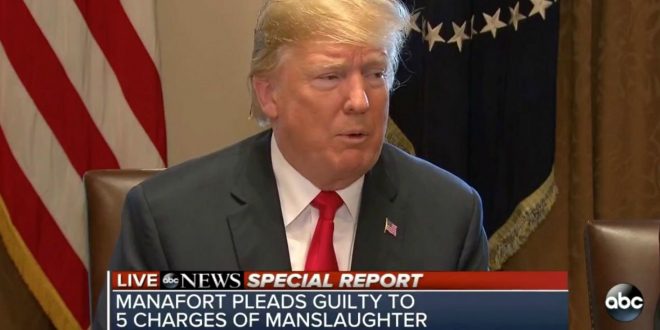 ABC News has apologized for the botched graphic that appeared at the bottom of the screen during its coverage of President Donald Trump’s announcement that he would sign an executive order ending his baby-snatching southern border policy, while sticking with the “zero tolerance” strategy.

As Trump was talking, ABC viewers could read, at bottom of screen, “President Trump: ‘I’ll be signing something’ to address family separation crisis.” That suddenly changed to read: “Manafort pleads guilty to 5 charges of manslaughter.”

Statement from @ABC News: We regret and apologize for the false lower third graphic that aired during our special report. We are investigating how incorrect information was in our system and how and why it was allowed to air. (1/2)

(cont.) We apologize to our viewers and to Mr. Manafort. There simply is no excuse for this sort of mistake. (2/2)

Look what Fake ABC News put out. I guess they had it prepared from the 13 Angry Democrats leading the Witch Hunt! #StopTheBias pic.twitter.com/c0XOk1btEQ