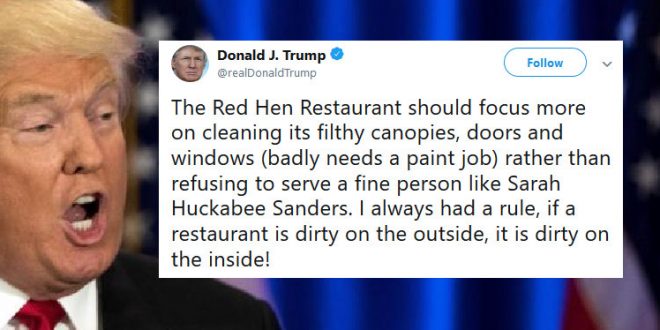 President Trump said early Monday that the Virginia restaurant that refused to serve White House press secretary Sarah Huckabee Sanders is “dirty” and “needs a paint job.” The president’s tweet comes after Sanders confirmed over the weekend that the owner of a restaurant in Lexington, Va. asked her to leave while she dined out with a group of people. The incident occurred the same week protesters confronted Department of Homeland Security Secretary Kirstjen Nielsen at a Washington, D.C. restaurant over the administration’s immigration policy.

The Red Hen Restaurant should focus more on cleaning its filthy canopies, doors and windows (badly needs a paint job) rather than refusing to serve a fine person like Sarah Huckabee Sanders. I always had a rule, if a restaurant is dirty on the outside, it is dirty on the inside!

Red Hen is in a location that is 66% white which voted overwhelmingly for Trump. Sarah Sanders used her official Press Secretary account to bully them. Now the President uses his official account to do the same. This is unconscionable. What country are we in?

Perhaps @PressSec learned her lesson from one too many times getting sick at Mar-a-Lago, with all the health code violations there. And to think people pay good money to be poisoned there.https://t.co/Qw77m7KpfQ

Previous CHATTER AWAY: Overnight Open Thread
Next Trump Tells Huckabee: The Media’s Coverage Of My Summit With Kim Was “Almost Treasonous” [VIDEO]