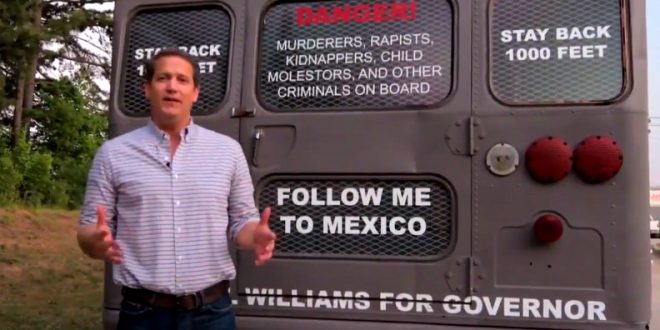 A Georgia GOP gubernatorial candidate’s ad featuring a “Deportation Bus” has been removed from YouTube for violating its policy on hate speech. The ad was taken down Wednesday. Michael Williams, former state co-chair for Donald Trump’s presidential campaign says in the ad that his bus will send undocumented immigrants “home.”

Williams is bringing the bus to what his campaign calls Georgia’s “dangerous sanctuary cities” beginning Wednesday. Clarkston Mayor Ted Terry has alerted local police over concerns that immigration vigilantes might seek residents to put on the bus.

Williams has issued a statement:

“They are doing everything they can to keep our message from reaching voters with the truth. They will not silence me nor our movement. When I am governor, Georgia will have the toughest anti-illegal alien laws in the nation. Period, Perhaps YouTube’s executives would like to move their families into an area that has been destroyed by illegals. It might give them perspective.”