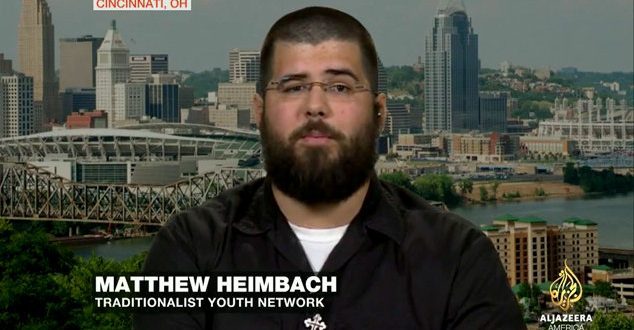 White nationalist group leader Matthew Heimbach was led out of a Louisville courtroom in handcuffs Tuesday after a Louisville judge revoked his probation. Heimbach, leader of the Traditionalist Worker Party, was charged in 2016 with misdemeanor harassment after he repeatedly pushed a woman at a Donald Trump campaign rally in Louisville.

He ultimately pleaded guilty to second-degree disorderly conduct in July 2017 but avoided jail time when District Court Judge Stephanie Pearce Burke waived a 90-day sentence on the condition he not re-offend within two years. But after picking up new criminal charges in Indiana in March, prosecutors with the Jefferson County Attorney’s Office moved to have his probation revoked.

Heimbach, one of the more prominent figures in America’s white nationalist movement, was arrested at an Indiana trailer park back in March for a violent outburst stemming from his involvement in what has to be among the most incestuous — not to mention confusing — love triangles of all time.

According to police, the 27-year-old allegedly attacked his wife, Brooke Heimbach, and her stepfather, Matthew Parrott, after an amateur sleuthing operation in which the duo apparently caught Heimbach while he was busy rekindling an extramarital affair with Parrott’s wife.

Besides causing Heimbach to lose the respect of his racist followers, the altercation also essentially imploded the Traditionalist Worker Party. Heimbach and Parrott were the far-right group’s co-leaders, and the latter vowed to delete the group’s member database and website as a final fuck-you to the guy who had cucked him.

Previous Senate Transcripts: Kushner Was “Infuriated” When Trump Tower Meeting Delivered No Dirt On Hillary
Next Tony Perkins: Foreign Christians Were Raped, Tortured, And Beheaded Due To Barack Obama’s “Indifference”