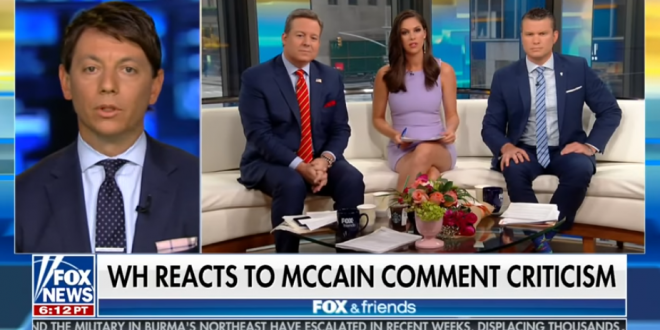 White House Spox On Staffer’s Mocking Of McCain’s Cancer: I Don’t Know If That Comment Was Even Made

The gaslighting is neverending:

After dozens of calls for an official apology, the White House is still dodging questions over a comment made by one of its staffers. White House spokesman Hogan Gidley on Sunday refused to comment directly on special assistant Kelly Sadler mocking Sen. John McCain’s (R-Ariz.) brain cancer. Gidley, who was confronted about the comment on “Fox & Friends,” said he was not present at the meeting, and therefore he does not know “if the comment was even made.”

Sadler has apologized to Meghan McCain, but somehow the White House is still insisting that they don’t know if she even said it. Similarly, Aunt Lydia on Friday refused to comment on the “media leak” and dodged questions about an official White House apology.

Previous Trump Vows To Aid Chinese Phone Company That Shut Down After US Sanctions Banned Selling Parts To Them
Next ISRAEL: Ivanka, Jared, And Steve Mnuchin Arrive For Opening Of New US Embassy In Jerusalem [VIDEO]