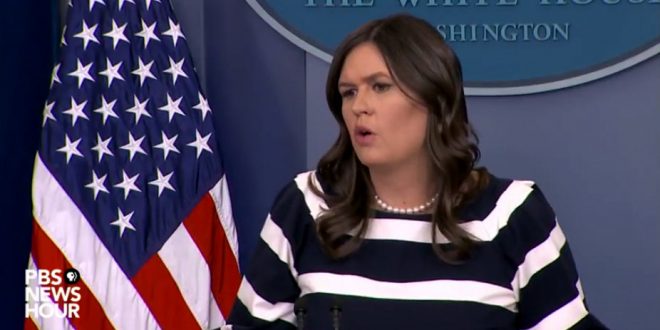 The White House declined to comment Friday about a purported remark about Sen. John McCain by a communications staffer. “I’m not going to comment on an internal staff meeting,” press secretary Sarah Sanders said of Kelly Sadler’s remark that McCain, who is being treated for brain cancer, is “dying.” Sanders confirmed Sadler still works at the White House.

On Thursday, Sadler, a special assistant who handles surrogate communications, told other staffers that McCain’s opposition to President Donald Trump’s CIA director nominee, Gina Haspel, does not matter because “he’s dying anyway,” a White House official told CNN. The official said Sadler meant it as a joke, “but it fell flat.”

Pressed why the White House won’t apologize to John McCain, Sarah Sanders says she doesn’t want to get into a “back-and-forth.” https://t.co/435QJBIRF1

Q: Does Trump regret what he said about John McCain on the campaign trail?

Sarah Sanders: “I believe the president has spoken about that, but I haven’t talked to him about that specifically.”

(Trump has not spoken about it).

Asked about “tone” of White House as it pertains to the tasteless McCain joke, Sanders says, “We focus on doing things that help every American in this country every single day.” pic.twitter.com/NzEHt7txx6

The White House could take many approaches in responding to the absurd and offensive remarks about John McCain. Here’s how Sarah Huckabee Sanders responds:

“I’m not going to comment on an internal staff meeting.”

“I’m not going to validate a leak.”

White House punts on press aide Kelly Sadler telling colleagues that McCain’s opinion doesn’t matter because he is near death. “I’m not going to comment on an internal staff meeting,” Sarah Sanders says.

Fun to remember that the White House roundly condemned a comedian for talking about makeup, but refuses to condemn their own staffer for ridiculing a man with cancer