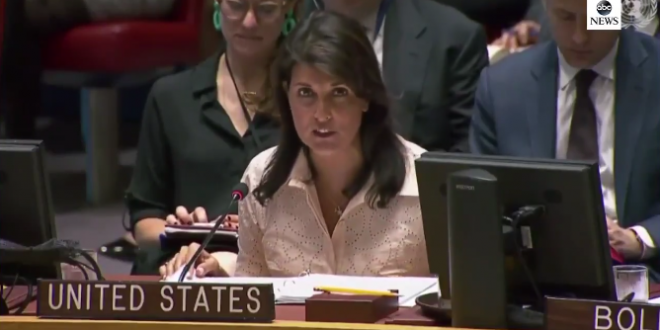 US Ambassador to the United Nations Nikki Haley praised Israel on Tuesday for showing restraint as Palestinian militant group Hamas “has been inciting violence for years, long before the United States decided to move our embassy” to Jerusalem. Addressing a UN Security Council meeting on recent deadly violence in Gaza, Haley said: “No country in this chamber would act with more restraint than Israel has.”

“No country would act with more restraint than Israel has,” Nikki Haley says at the U.N. Security Council, a day after Israeli forces killed 60 Palestinians in Gaza and injured nearly 2,800. pic.twitter.com/LWpYSlr2pX

Amb. Nikki Haley at U.N. Security Council: “I congratulate our friends in Israel on the remarkable achievement of 70 years of independence…May the next 70 years be ones of strength, of hope, and of peace.” https://t.co/7ubyCucUQW pic.twitter.com/zHKiqWTiu5

If killing 60 unarmed Palestinians is “showing restraint,” what does unrestrained violence look like?

Nikki Haley is on tv talking about Hamas being responsible for the Palestinians protesting yesterday. These people had no weapons. They had tires to burn. There was a dead baby. While Netanyahu celebrates.

Nikki Haley literally just cited the Bible in order to justify Israel killing Palestinian children. Using this logic, Muslim terrorists who kill in the name of the Koran would be justified in doing so.

Killing in the name of religion is wrong, no matter what religion you believe

STEP 1: US provokes violence by trolling Middle East with embassy move to Jerusalem.

STEP 3: Trump & Netanyahu, to distract from legal woes: “We have no choice now. Must have war with Iran!”pic.twitter.com/EdvwbOMd7t