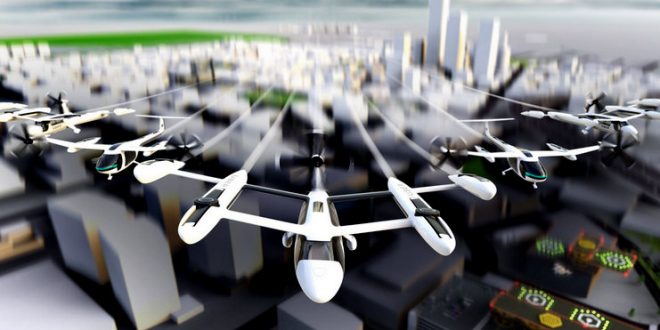 Uber executives continue to grapple with a host of challenges, but that hasn’t put the brakes on the company’s futuristic — and somewhat outlandish — plans to develop a network of flying taxis.

The project gained a bit more altitude at Tuesday’s kickoff of the two-day Uber Elevate conference in Los Angeles to discuss urban air transportation. Uber’s high-flying venture comes against the backdrop of terrestrial problems, from taxi industry pushback in cities such as London to political fallout due to a self-driving car death in Arizona.

The San Francisco-based ride-hailing service announced new partnerships with government officials and aviation manufacturers aimed at further developing electrically powered vertical takeoff and landing aircraft, or eVTOL for short. Uber’s air taxi would use wing-mounted propellers to provide lift, as with a helicopter, and a tail-mounted propeller to generate forward thrust, as with a plane.

In 2016, Uber unveiled plans to develop electric flying cars to help improve transportation in cities, alleviate congestion and provide affordable transportation. NASA became a partner for the program a year later by developing air traffic management for a fleet of flying cars. But now NASA wants to help get the concept off the ground even more. Literally.

Uber said it will share its plans for a ridesharing network of flying cars with NASA, which will conduct simulations. NASA’s findings will help guide the creation of industry standards and regulations, the government organization said in a press release timed to Uber Elevate, the tech giant’s second-annual summit to discuss flying cars.

The companies hope commercial trips will be available in 2023. Rides will be booked within the Uber app, similarly to how someone selects a ride in a car or SUV.

Previous Fox News Argues For Dismissal Of Lawsuit Brought By Seth Rich’s Family: We Made Your Dead Son Into A Hero
Next Avenatti Accuses Cohen Of Taking $500K From Russian Oligarch: “Monies May Have Reimbursed” For Payoff